Write an Integer Example for the OptoMMP Function Blocks

In this second example, we’ll write an incrementing integer value to the Scratch Pad area of the OptoMMP memory map.

The goals of this example are:

This example assumes you have basic familiarity with creating and running an application in the CODESYS Development System. It also assumes you’ve read the Hello, world! example.

Step 1 - Determine the OptoMMP Address to Use

The value will be written to Element 0 of the Scratch Pad 32-bit Integer area.

The OptoMMP memory map address can be determined in two ways.

Often it’s desirable to keep a client connected as much as possible. This can be accomplished by taking the client’s xError output, negating it, and then feeding it back into the xConnect input.

Connecting xError and xConnect in this way will enable the following behavior:

It may take one or more PLC cycles for any of the states changes to complete.

As stated in the Overview for this example, we want to write the udiVar value as often as possible. This can be accomplished by taking the MmpClientWriteUDINT block’s xBusy output, negating it, and then feeding it back into the xExecute input.

Connecting xBusy and xExecute in this way will keep writing the value as often as possible.

Finally, we need to feed th udiVar variable into the write block. This can be done by directly assigning udiVar to the udiData input. Or, for a more visual approach, the ADD block can be connected to the write block, like this: 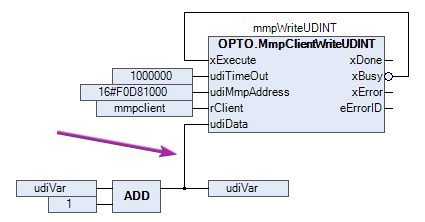 Before running the application, use groov Manage to view the Scratch Pad value.

If all goes well, there should be a solid blue line between the client’s xError output and xConnect input. The write block’s xBusy should be cycling between TRUE and FALSE, as each request is completed.

This example in Ladder Logic (LD) is very similar. Here’s one way it could be written:

This example in Structure Text (ST) is very similar. Here’s one way it could be written:

Continue on to the Reading an Integer Array example.